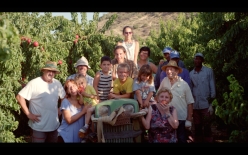 A podcast of dialogues with directors in the process of making their next film.

Second chapter of the podcast THE FUTURE. A podcast of dialogues with directors in the process of making their next film.

Carla Simón visited Tabakalera in March 2018 for a session in which she told us about the process of creating her first film, Estiu 1993. On that occasion, and in conversation with the filmmaker Mikel Gurrea, we were able to access her hardware and all the materials (camera tests, script, shots, rehearsals, various montages...) from which later her debut opera emerged.

Now we invite Carla again to our virtual sound space to tell us what will be her next project, a new film that bears the provisional title Alcarrás.

Cinema of the future, films that do not yet exist, but that we can begin to imagine.