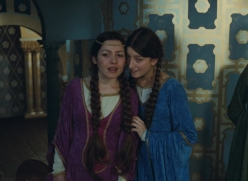 Pascale Ogier was 20 years old when she first stepped in front of Éric Rohmer's camera. But that was not her first performance: as a child she had appeared briefly in the film Paulina s'en va / Paulina Is Leaving (1969), directed by André Téchiné and starring her mother, Bulle Ogier.

Cinema was always a part of the daily environment in which Pascale grew up: on the one hand this was due to a clear maternal influence, as Bulle Ogier had gone from theatre to cinema work at the end of the sixties with great success and was a regular in films by Jacques Rivette, André Téchiné, and Alain Tanner. On the other hand, because her mother's partner, Barbet Schroeder, was one of the names that marked the beginning of the French New Wave. Founder of the production company Les Films du Losange, his figure is key to understanding Rohmer's career.

Somehow, therefore, the young Pascale seemed destined to be –sooner or later– one of the figures of French cinema. Whether it was because of family influence or her great talent or that daily living with the story of the cinema at the fore.

Perceval le Gallois marked the beginning of her career. She was 20 years old, had very long hair, and her role was still small. Pascale appeared as a part of the chorus that accompanies the adventures of Perceval the knight. It was not yet an important role, but there she was, together with the group of actors and actresses who would accompany Rohmer in the following years and in important titles by him (Fabrice Luchini, André Dussollier, Marie Rivière, Arielle Dombasle, Pascale de Boysson, Gérard Falconetti, and Marie-Christine Barrault).

It is wonderful to see this film again today in its restored version. Rohmer narrates –in the form of a chanson de geste– the adventures of this innocent knight who discovers the world for the first time. It all happens on a theatrical stage that is very naïve in style, as if each scene were a painting from the Italian Quattrocento period. And the actors recite the encounters with King Arthur and the battles of the Knights of the Round Table in verse.

In a way, it is a chamber film: musical, because of the choruses, medieval instruments, and songs that accompany the action; and tiny, because of the decision to shoot it in toy-like interiors (golden castles, fantasy trees, impeccable costumes). Excellent cinematography by Néstor Almendros (who the following year was to win the Oscar for best cinematography for Days of Heaven by Terrence Malick). And excellent work in terms of the sets, music, and costumescostumes (Jean-Pierre Kohut-Svelko, Guy Robert, Jacques Schmidt).

Pascale accompanies, sings, takes care of the horses, and waits her turn. She still has time before she is to start dancing in front of the camera, but it is clear that her Renaissance-style figure is soon to be illuminated.

The film received the Méliès Award from French critics.