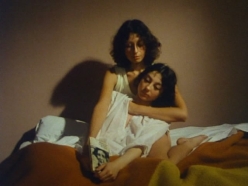 This is a radical film. Radical and complex. But let's start at the beginning. Let's start with Pascale. Her character is called Muriel Pucheux, a young woman who works as a secretary at the offices of a chemical company. Pascale plays a secondary role, although her appearance and development is key to the story that arises.

The protagonists are Agnès (Lisa Heredia) and Florence (Marie Rivière), two friends who decide to go live together on the outskirts of Paris, in the Bagnolet neighbourhood. Here, Paris is no longer the city of the Seine and of classical monuments; it is not the city of gardens, promenades, cafés, and romantic Bohemianism, no. Quite the opposite.

This is the story of several working women and the abuse and violence that is exercised against them. This is the portrait of a city and of a production system that are totally dehumanised. Existentialism and alienation from modern life. Sexual harassment at work. Powers trying to continue to assert their strength over working women.

The film directly and crudely presents a catalogue of violence, fear, and submission: at home, at work, in life, in relationships. “To file documents, grow old, die. That is not life”, says one of the workers. Muriel / Pascale is one of the victims. Agnès, in solidarity with her, is the one who tries to face that system. But the system responds relentlessly: this is the destruction of a woman.

The piece was filmed in 16 mm and is closer to the proletarian and critical spirit of certain British New Wave films than to other titles arriving from France at that time. And today it continues to be a true rarity due to its direct and crude approach.

Éric Rohmer appears in the background as an important figure; after all, it was thanks to the support of his production company Les Films de Losange that Brisseau was able to develop his career. Brisseau always remembered him, and both always pursued the amateurism and direct approach of their early work.

Now the end, the complex part, life. In 2000, Jean-Claude Brisseau was convicted of sexually harassing three actresses. It is a fact that we cannot avoid when presenting a film whose theme is the abuse of power. It is paradoxical to be talking about a piece that is a direct plea against abuse and, at the same time, to find this chapter of the director's biography... that is true. But here, the reasons behind, and the value of, this film are written.

It is 1978 and, although in small roles, Pascale has already introduced herself to the world of great French cinema in front of the cameras of Brisseau and Rohmer. The young performer is combining these initial pieces with some Parisian underground short films and with television and theatre appearances. Precisely in 1979, and under Rohmer's stage direction, she was to be the main actress of the adaptation for the Nanterre-Amandiers Theatre of the piece Das Käthchen von Heilbronn by German author Heinrich von Kleist. Then came her first major leading role alongside her mother, Bulle Ogier, and under the direction of Rivette.