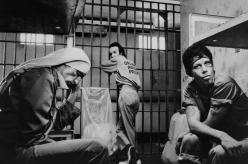 Pascale died one day before her 26th birthday. The stories go that, that very night, Jim Jarmusch was travelling from New York to Paris to celebrate his friend's birthday. They had met each other years before at a film festival in Bergamo, Italy. They became close and travelled together through Europe and America. One wants to imagine that a movie could have emerged from that meeting.

There are several photos from that time in which we see them together, the two of them wearing sunglasses, with an American car behind them. "Only lovers survive", I think every time I look at those images. There is also a small identity card portrait/photo that Jarmuch gave to Pascale in Paris on 6 May 1983. On the back, one can read, “In memory of Arthur Cravan. Hey, Ogier! These days, it is strange for the death of a great man to be able to stop a train.”

There are more letters and mementoes.

Part of this material is collected in the book that Emeraude Nicolas dedicated to Pascale and that was published in Paris a couple of years ago. It is a marvellous publication. I'd like to read and transcribe, from page 65, an emotional memory by Jarmusch about Pascale, written in New York on 31 October 2014:

In 1984, Pascale was working on a new movie in which she was going to be the star: Elsa, Elsa by Didier Haudepin. And the feature film Ave Maria, directed by Jacques Richard, was about to be released – a film on which she had worked alongside Anna Karina. Her last night was spent at the Le Palace club, a classic Montmartre party hall that opened in 1912 as a cinema.

The closing credits of Down by Law dedicate the film to Pascale Ogier and Enzo Ungari (Italian critic and screenwriter).

Now the phantasmagorical final: Is it possible to imagine Pascale in Down by Law? Would Jarmusch and Ogier have worked together on this movie? Is it possible to find in its images something with the shape of a spectre, someone with a foreign accent, someone who does karate or who dances when there is nothing left to say?

The film begins with a shot of a cemetery. And the end, the love story, is resolved in Luigi's Tiptop, a restaurant in the middle of nowhere near the Texas border. The end of the love story is a slow, close dance.