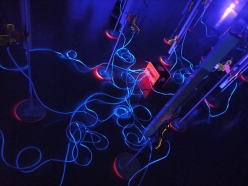 René Descartes
Discourse on the Method of Rightly Conducting One's Reason and of Seeking Truth in the Sciences. 1637

What is a living being? This has been a constant debate between science and philosophy: Technologies such as artificial intelligence, the expanded body, and machine learning invite us to reconsider the theme, and introduce cybernetic variables such as the distributed mind, biomimetics, social networks, and telecommunications that help us rethink the concept of life through nature’s mechanics and organisation.

Mecánicas Forzadas (‘Forced Mechanics’) is the result of Tabakalera’s first-time participation in the Summer Sessions residency programme, which is a series of international art and technology residencies sponsored by Rotterdam’s V2_Lab for the Unstable Media together with a global network of cultural organisations including the Art Center Nabi in Seoul, Hangar in Barcelona, iMAL in Brussels, and the Points Center for Contemporary Art in Shanghai.

The piece is the result of a hybridisation of two disciplines; a video installation proposed by visual artist Oihane Iraguen, and robotic music incarnated by creator and experimental luthier Jonathan García Lana ‘Tunipanea’. The projected video piece contains performative content based on the body, and is simultaneously the score that activates a machine with mechanisms in movement and sounds that are material and present in the space. The work reflects the image projected as a surreal process of the machine; a deferred telepresence where a body’s movement occupies the physical space through metal, wood, and electronics. Mecánicas Forzadas (‘Forced Mechanics’) expands the limits of film and images to the realm of the organic.

Through the translation and transcription of code, the artists propose a direct relationship with the mediums that interest them and draw their attention individually. On one side, Oihane has created a video piece with with organic visual content and bodily expression. The video is built on the concept of “involuntary movement as an aspect intrinsic to nature, the organic, and the body itself”. It is the idea of “composing” through the involuntary and unconscious, through instinctive, reflective acts. The movement captured on video creates a musical score in real time that attains materiality in the mechanical pieces produced by Tunipanea through a hybrid musical robot that adapts the mechanics of an old piano to form a large-scale modular metallophone.

The Mecánicas Forzadas (‘Forced Mechanics’) installation also presents the creators’ efforts to transversally explore the ways of relating different creation languages and methodologies in a residency where both artists have been invited to work together for the first time at Tabakalera’s Medialab.