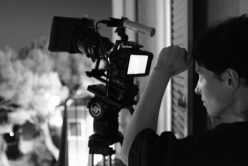 A podcast of dialogues with directors in the process of making their next film.

This is a train journey at the start of filming Helena Wittmann's new film.

This is the future and I now remember the beginning of Claire Denis' High Life (2018), where a group of young people traveled and survived on the roofs of Europe's trains before being sent forever on a space journey, beyond space and time.

Helena Wittmann is a teacher at the Elías Querejeta Zine Eskola and her previous feature film, Drift (2017), was screened in Tabakalera on Saturday, March 24, 2018. Helena Wittmann was born 1982 in Neuss, Germany. Originally studying Spanish and Media Studies in Erlangen and Hamburg, she went on to attend the Academy of Fine Arts in Hamburg (HFBK), where she graduated in 2014. Her works, including her first feature film DRIFT (2017) and the short films ADA KALEH (2018), 21,3°C (2014) and WILDNIS (2013), were shown internationally at film festivals and exhibitions. From 2015-2018 she worked as artistic research assistant at the Academy of Fine Arts in Hamburg. Helena Wittmann works and lives in Hamburg, Germany.

Human Flowers of Flesh is the title of her new film, which is being filmed right now, during the month of August 2020. Never has The Future been so close to a film in the process of being created. Never had The Future traveled to the filming location.

Helena spoke to me during my visit about a book that served her as inspiration from the film. I copy a fragment below. This is the future and so it begins:

"On the other side of the river, the dance was at its peak. Pick-up melodies reached the room. You couldn't see the moon, but it had to be there, behind the mountain, the night was clearer than when we arrived. The room overlooked the river on one side and on the other side, the sea. From the first floor you could see better the surroundings, in particular the mouth of the river. A little to the left of that mouth was the white shape of a ship. In entrepuente it was faintly illuminated. It was the American yacht. The sea was calm, but the surface seemed rough in front of the totally smooth river. A shiny foam tape marked the joint. I've always liked that kind of landscape, geographical so to speak. The capes, the deltas, the tributaries and, above all, the mouths, the encounter of rivers and the sea."

The Sailor from Gibraltar, Marguerite Duras, 1952.