If it were love 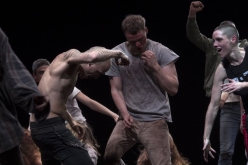 This film maker is all about direct movies, documentaries, fictional works, and observing movement and the sensuality of skin, as demonstrated in his latest work of pure choreography If It Were Love (2020). Based on the stage piece Crowd by Gisèle Vienne, it won the Teddy Award for best documentary at Berlinale 2020.

“Gisèle invited me to the premiere of Crowd and it moved me in a special way. I was in the front row. The performance was unfathomable and I had to edit it live while the characters danced. It’s such an open piece that once you immerse yourself, it carries you away. I thought about an adaptation for film that would reflect those amazing emotions. Very ambitious, and yet very simple.”

And so it was. Chiha exhibits total freedom as he records the rehearsals of the dance piece Crown, Gisèle Vienne directing, the 15 dancers on the stage, images of backstage, and builds a hypnotic spectacle that slowly takes shape. In this long night of romance and sexual tension – a rave – the actors dance and breathe at the same pace, attracting and repelling one another.