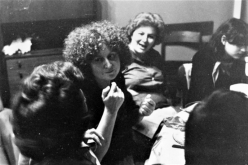 The 150 Hours Courses were an educational experiment implemented in Italy from 1974 to 1982 available to factory workers and farmers initially, and expanding to include women a couple of years later. With the assistance of their teacher they formed a study group and continued to meet and reflect on issues they felt important. Through the women’s personal reflections, articulated against the backdrop of atmospheric landscapes and interiors, the film reveals how the course gave the women a sense of confidence in their own intellectual abilities and creativity. Additionally, it provided them with an alternative to the monotony of domestic work and connected them with a community of like-minded women.

Between a documentary, a black comedy and a musical, this highly original piece made in collaboration with the Women and the Law collective, shows some of the ways in which states, throughout their history, have designed systems that pushed women into economic dependence on men in different historical periods.