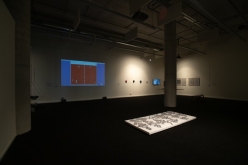 One common space for the cutting edge that has guided artistic criticism towards established social structures and institutions since the 1960s consisted of pushing for a radical expansion of the idea of play. From Fluxus to the Situationist International, with Happenings and multi-media installations, a common desire to break down the barriers that separate contemplation and participatory action, work and leisure, games and daily life was revealed.

Once the utopian energy of those dreams of transformation was depleted, the space for play seems to have become overflown, to the point where social order’s own configuration begins to obey its abstract, speculative, and agnostic logic.

Gamification, or the implementation of gaming in everyday practices, is a key concept for the understanding of the works presented in this exhibition, and is today included in global finance, education, media narratives, a wide variety of exercises and training, and in other spheres that used to be beyond its spell. This expansion of gaming towards social reality responds to the profound social transformation caused by the arrival of digital culture and video games.

Unexpectedly, digital technologies have been configured as indispensable prostheses and substitutes for bodies that have lost a large part of their own social and relational abilities. The appearance of the COVID-19 virus has unquestionably brought about this abrupt mutation of the codes we use to understand the cultural, symbolic, and economic processes that establish the social fabric.

Following this line of argument, many artists state that video games as a format constitute a type of referential model for a population that spends a large portion of their day-to-day using all kinds of programmes regulated by a system of points and bonuses, performance graphs and levels, and continuous self-improvement.

The exhibition project Bideo-jokoak. Play Without End brings together a body of work created by artists that were able to understand the singularity of these processes when developing their projects, exploring their artistic dimension alongside their political and cultural possibilities. As such, Tabakalera’s Contemporary Art department offers up these works as tool for analysis and reflection, accepting the central role that video games have acquired as a medium. Ultimately, their engineering based in action, participation, and exercise hides the keys of our relationship with algorithms: a secret that shapes us as perpetual gamers.