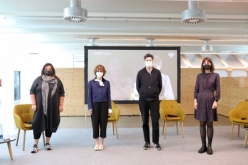 Dea Kulumbegashvili, winner of the San Sebastian Film Festival Golden Shell for Dasatskisi / Beginning (2020), has returned to the city to carry out an artistic residency at the International Centre for Contemporary Culture - Tabakalera. The Georgian film director is developing her next full-length feature film project in that artist’s space at Tabakalera.

In recent years, Tabakalera, the San Sebastian Film Festival, and Elías Querejeta Zine Eskola have developed a strategic line of support for new film and audiovisual talent with programmes such as Ikusmira Berriak, Noka, and 2deo Serieak. Kulumbegashvili's invitation falls within the framework of this same idea of integral film creation support: it is no longer about films making it to Festivals once completed, but rather fostering creation processes before they exist, offering space, time, and professional resources for their development.

Her stay will be extended through 7 June, and is rounded out with a public programme that is open to the public:

On Monday, 31 May at 18:00, Dasatskisi / Beginning (2020) will be screened in Tabakalera’s cinema within the ZINEMALDIA + PLUS spotlight, presented by the San Sebastian International Film Festival and the director herself.

The following day, on Tuesday, 1 June at 19:00, a CINE HABLADO (“Talking Cinema”) session will also take place in Tabakalera’s Cinema 1, where the director will explain her creation process for this film, as well as her next project.

Born in 1986, Dea Kulumbegashvili studied film directing at Columbia University (New York). Her first work, Invisible Spaces (2014), was the first independent Georgian production to compete in the Official Selection of short films at Cannes, the Directors' Fortnight of which being where she then presented her second short, Léthé (2016). Both works were shown last October at the ZINEMALDIA + PLUS spotlight, sharing Tabakalera’s screen with works from other award-winning filmmakers from the Festival.

Tabakalera and its film partners -San Sebastian Film Festival, Elías Querejeta Zine Eskola, and the Basque Film Archive- have positioned themselves in recent years as a singular benchmark in the international residency circuit by launching a contemporary culture centre, film research and training school, film archive, and international film festival within the same project and space.

This is not the first time that Dea Kulumbegashvili has been a resident of one of these international programmes, as she has already taken part in the Cannes Festival residency programme Cinéfondation, where she developed her first full-length feature film. The writing and conceptualisation for Beginning was completed later at the Sam Spiegel International Film Lab in Jerusalem, The Sofia Meetings, and the Rotterdam Festival Hubert Bals Fund. She now comes to Tabakalera to develop her second full-length feature film.

This shared drive to discover new talent and help them along their professional paths is bearing fruit: Ikusmira Berriak is a good example of this attention to new voices, as more than thirty directors have developed their projects at Tabakalera in its seven editions, which have later premièred at the world's most important festivals, as well as in the San Sebastian Film Festival's Zabaltegi-Tabakalera and New Directors categories.

The unique nature of the Tabakalera film partner talent support programmes is also of particular note. Dea Kulumbegashvili’s residency also includes an invitation for the director to be a part of the exhibition project next year. This way, we add the possibility of her talent expanding from cinemas to the building’s exhibition halls, which can only happen thanks to the comprehensive nature of our project.