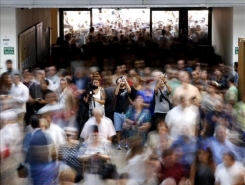 City and Other Policies was launched in 2013, when the walls of the Tabakalera building were still being demolished and rebuilt. The project was intended to serve as a constant questioning of the policies running through the actions and strategies of government and control over the public, stressing the political dimension and competence of both the city and the territory.

The initiative is based on a recognition of the process of mercantilisation of public spaces that has guided town planning and the role played by architects as allies of Fordist capitalist propaganda. This context has led to a loss of meaning in the construction of the common and a defusing of the political subject. City and Other Policies is a search for other ways of addressing the work carried out by architecture, by loosening ties with hegemonic powers and anaesthetised policies. This displacement requires that we overcome the logic of control over the spaces in which life is lived, in order to revive the community-based logic that stresses experience, engagement and social spontaneity over any other motivation. Taking architecture as a possible tool of emancipation, places of dissent and fiction are fostered, the aim being to feel for cracks in which we can construct another city and another territory.