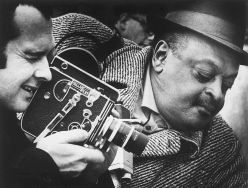 Ben Webster is one of the great figures of American jazz. He spent a few years travelling around Europe before coming to a temporary halt in Amsterdam. Johan van der Keuken’s camera follows him on his wanderings through the city.

Van der Keuken brings together various audio and visual material: memories of an elderly married couple, personal holiday photos, the saxophonist Ben Webster, poems and a portrait of his grandfather who introduced him to the world of photography. A representation in which the various spaces flow together prompting reflection about the tension between film and photography, time standing still and the moving image. Van der Keuken revises and reformulates, like an alchemist, his own aesthetic principles and shows how these tie in with his own social environment.