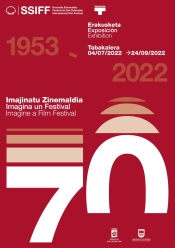 The display running on several audiovisual installations located in Tabakalera’s different public spaces will show the main highlights of the Festival’s history, featuring hundreds of videos running for a total of more than 150 minutes.

Coming into the ground floor from the Plaza Nestor Basterretxea, the first installation in the visit has eight screens dedicated to the Public. On the one hand, the show suggests following the ambience of the red carpet and the cinemas at different periods of the Festival and on the other, stopping to study the selection of photographs expressly sent in by the locals.

The stairs leading to the first floor will bring you out at the Media installation dedicated to the role of those who have contributed to spreading news of the Festival worldwide and to preserving its memory thanks to their articles, interviews, photographs and audiovisuals.

Continuing on the first floor, a long corridor has been turned into a Photocall, presided over by a giant screen of 24 x 4 metres showing images screened simultaneously by five projectors. This is a magical space inviting visitors to walk along the red carpet while enjoying shots of more than 800 celebrities who have visited the Festival in its seven decades.

Finally, at the end of the corridor, a curtain leads into the last room, going by the name of Zinea and taking the shape of an enormous film theatre where visitors can recall some of the most iconic moments in the Festival’s history on a series of synchronised screens.