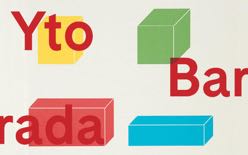 Artist Yto Barrada (Paris, 1971) has done much of her work in her place of origin. Since The Strait Project (1999-2003), where she depicted the idiosyncrasies of post-Schengen Tangier, as a city across the Straits of Gibraltar at Europe, Yto Barrada has continued to address economic, social and cultural aspects of Morocco, related with the country’s colonial legacy and her own identity.

For the show at Tabakalera –her first solo exhibition in Spain– Barrada is presenting videos, photographs and sculptures from her new work, as well as some older pieces, dealing with issues related to history, geography, the invention of tradition and the meaning of the modern.

Her most recent works address themes such as palaeontology and national heritage.

They include Faux départ (2015), dealing with the manufacture of fake fossils in a Moroccan context. North African Toys (2014-2015) is a series of photographs of Berber toys from the Quai Branly Museum collection in Paris, all collected during missionary expeditions to North Africa.

The pipework sculpture Plumber Assamblage (2015), a sort of ready-made, is a device used by out-of-work plumbers in the souk in Tangier to attract potential clients. The installation tips a nod at early twentieth-century avant-garde, as does a carpet made with collaboration from women from the Maison des Femmes Darna in Tangier, inspired by the abstract designs of Swiss Dadaist artist Sophie Taeuber-Arp.

Amongst the oldest pieces in the exhibition we find the films The Magician (2003) and The Smuggler (2005). In these, Yto Barrada gives a voice to characters on the margins of society who are trying to adapt to the country's economic situation. Both videos become instruction manuals –on magic tricks and textile-smuggling– in keeping with the artist's thirst for cataloguing and listing, which can also be seen in North African Toys.

Modernism as a colonial legacy is also reflected in Reprendre Casa. Carrières Centrales, Casablanca (2013), a series of photographs showing trends in modernist urban development of the city, and highlighting the failure of a universal model which did not take account of the needs and customs of the local population.

Her preoccupation with urban development in Morocco can also be seen in some of her earlier work. In Beau geste (2009), a group of young people try to save a palm tree in a plot between buildings to prevent a new construction being erected. The palm tree, an important icon in Yto Barrada's work as a symbol of exoticism and modernism, also appears in her film A Guide To Trees for Governors and Gardeners (2014).

With Twin Palm Island (2012), one of her iconic pieces, she summarises several of the ideas found throughout her work. Exoticism, tourism and decadence are reflected in this metal sculpture with coloured bulbs, recalling the signs over tourist establishments in decline.

The two series of silk-screen posters A Modest Proposal (2010-2012) and Faux Guide (2015) complete the exhibition and extend this universe of palm trees and fossils.