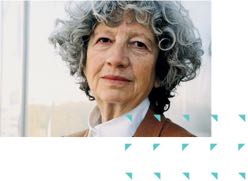 Ulrike Ottinger is a German artist, film director and photographer and one of the key figures in the so-called New German Cinema (Neue Deutsche Welle), a movement which redefined national, political and cultural identity through its attitude and films in the 1970s. Alongside Fassbinder and Werner Schroeter, Ottinger incorporates sexuality, the body and music as identifying features of that new youth, thus breaking with and stretching the conventions of a cinema in search of meaning. A new type of film needed to be invented and that is what they did.

Landmarks in Ottinger’s career included her art education, her years as a painter in Paris, and her return to Konstanz, in West Germany, where she was to combine her work in a gallery, with scriptwriting, running cinema clubs and directing her first films. This was followed by a phase in Berlin, where she moved in 1973 and where she became increasingly well-known in the emerging popular culture and among the art, cinema and feminist movements.

Ottinger has made 24 films and her style has ranged from pictorial fiction –controversial and ground-breaking in her early work– to the purest documentary approach, making some of her films oriental travel journals. If the exotic can be defined as the alien, the different, the mysterious, that which is yet to be discovered, this is a thoroughly exotic director and season.

As for the event itself… Ottinger presented her latest film, a 714-minute journey (12 hours divided into 4 episodes) from Alaska to Bering Island, at the most recent Berlin Festival. We will be premiering the film and also screening one of Ottinger’s classics. And as part of the Basque Film Library and DSS2016 City of Culture’s programme of Film Dialogues, we are organising a meeting with the director and a dialogue with artists Sra. Polaroiska (Alaitz Arenzana and María Ibarretxe).