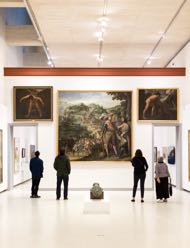 Peace Treaty is a project with an international scope which comprises a collection of exhibitions, contemporary artistic productions, publications, seminars and conferences on the representation of peace in the history of art, culture and law. It starts with the emblematic figure of Franscisco de Vitoria, who was the the inspiration for the first international school of law - the School of Salamanca - in the 16th century, an era that was defined by the expulsion of Moors and Jews from the Iberian peninsula, the colonisation of America and wars against «heretics». It concludes with the series of peace agreements that emerged from the successive wars of the past century up until the present. Peace Treaty analyses the relationship between war and peace to understand the symbolic transfers that occurred between both, with the goal of understanding the world and its laws not in order to submit to them, but to make them more hospitable. In addition, the central exhibition 1516-2016: Peace treaties, which was held in San Sebastian, is a project that had included seven exhibitions on historical events, a case study, and seven contemporary art productions in various areas such as Alzuza, Bayonne, Bilbao and Vitoria. The offering also includes an educational plan which has been developed in collaboration with Tabakalera. The project publications included three essays from art critics Susan Buck-Morss, George Didi-Huberman and Ángel González García, a collection of works from Archivo F.X.: Pure violence; as well as an encyclopaedic compendium with materials from the project. After four years of research, which included the project's first instalment, 1813. Siege, burning and reconstruction of San Sebastian, an important legacy was resulted. This included a series of material on the representation of the figure of «Peace», for both researchers and professionals, as well as aficionados and visitors.