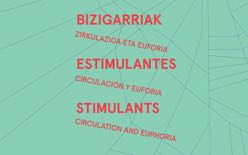 This exhibition sets out to study stimulants – such as coffee, sugar, cocoa, tobacco or opium – that started to circulate worldwide following the great voyages of exploration that took place in the 15th century. These commercial exchanges raised the curtain on an era in which the economy came to be understood as the basis of collective life.

The exhibition Stimulants: Circulation and Euphoria presents productions by artists specifically designed for the project, together with other works of art and materials from archives and museums. It also includes documents created during the programme of conferences, seminars and workshops held in Tabakalera ICCC in 2015-2016.

Unknown in Europe until the 15th centuries, when their trans-oceanic circulation began, these substances gradually – sometimes immediately – became part of daily life in European countries, initially as luxury items and later more generally, until they created consumer habits that society as a whole could participate in.

On another level, the use of stimulants created effects that were similar to these movements on a worldwide scale. They stimulated and extended the realm of action of the human body, giving rise to an endless series of relationships in which links between desire and will, drunkenness and capitalism or subjectivity and world view became particularly important.

It is a system of relationships comparable to that of the nervous system, whose analysis could be made – as proposed by this exhibition – by comparing it with a third movement and change of scale: making a leap from this internal and microscopic level to a horizon that goes beyond human intervention, that of the circulation of the forces that determine the movement of the planets and (linked to them) activity on Earth… e.g. day and night, the four seasons or the tides. A level which, in turn, is seen as a scenario for the search for meaning and wondering about the nature of things.