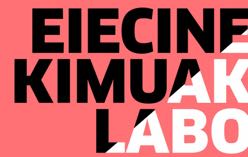 LABO is back. It’s over ten years since the relationship between Donosti and this section, the boldest of the International Short Film Festival in Clermont Ferrand (France), started. We can say that this is already a classic of sorts at the end of the winter season. We have seen many artists evolve in LABO: Nicolas Provost, Gabriel Abrantes, Sergio Oksman, Hayoun Kwon... And we too have evolved with LABO: first, by including the local short films from Kimuak (the selection of the best Basque short films) in the programmme that accompanies this Festival. And this year, for the first time, we shall be including as well the shorts that won the International Film Students Meeting (EIECINE), the section of the San Sebastian International Film Festival with the greatest eye on “the future”.

What started out as a few screening sessions to show the most innovative works of the short film world has gradually become a week full of films and activities. This year we again propose a creation workshop to go with the screenings: Luis Macías, from the Crater Lab Laboratory in Barcelona, has been invited to give a workshop on the ABC of the smallest celluloid format: Super-8 mm workshop to shoot, develop and experiment. We also recover, hosted by Arteuparte, the Anatomie du Labo exhibition, with graphic materials of the artists participating in the section: drawings, designs, posters and paintings…. LABO is back! Long live the shortest week!