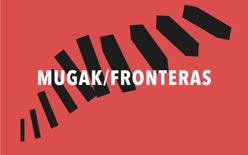 The researcher Maite Garbayo Maeztu will be developing in 2017 Mugak/Fronteras, a project that belongs to the second edition of the residency for artistic research that Tabakalera and San Sebastian 2016, European Capital of Culture launched back in 2016. This open call had the goal of supporting reseach processes in projects that help integrate society and citizens with contemporary art practices.

The Mugak/Fronteras public programme gets under way, directed by researcher Maite Garbayo Maeztu as part of the 2017 artistic research residency programme run jointly by Tabakalera and San Sebastian 2016, European Capital of Culture.

Throughout 2017, Mugak/Fronteras asks us to rethink the notion of the border, drawing on art, writing and certain manifestations of visual and popular culture from border contexts, mainly but not exclusively against a Basque backdrop.

The project approaches the concept of the border and the material, historical and performative reality of the border in the greater Basque Country region through ‘border thinking’ — edge-based knowledge which allows us to think of complex and shifting dialogical identities and practices. It considers the border beyond its geopolitical nature: as a knowledge theory about what lies beyond, questioning the devices that produce and manage knowledge; a dissident place which resists essentialisms and territorial, identity or disciplinary hierarchies; a gap and a bridge, within this context marking, crossing and going beyond what is Basque to reshape and destabilise binary notions of identity and space; approaching the border through its polyphony (its three languages) and thinking about it not from a place of opposition but in terms of translation.

Three lines of research will be taken forward, sometimes crossing and cross-pollinating one another: Border Epistemology for Thinking Identity; Muga vs Border: popular culture and performativity; and Artistic Practices on/from/about the Border. These three ways of considering and addressing the concept of the border will be reflected in the seminars, artistic interventions and excursions organised in the Pyrenees border zone which complement the project.