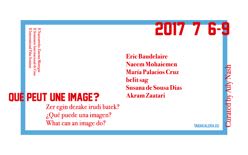 Tabakalera International Center for Contemporary Culture presented its second International Film Seminar: four days of sharing films, texts, processes, audiovisual works, discussions and exchanges on both sides of the screen. Like in our first edition, we took our summer exhibition, this year the solo of the French artist and filmmaker Eric Baudelaire, as the departing point. We invited curator Aily Nash to draw an itinerary and propose a series of films, filmmakers and contemporary artists whose work allowed us to reflect upon the historical, political and personal aspects of the image itself.

This phrase, used by philosopher Pierre Zaoui when reflecting upon Baudelaire’s practice, was a starting inquiry for the seminar. The moving image practices presented in the seminar investigate the complex relationship between the image and political and historical narratives. The question of what the image was capable of doing was at the heart of the formal experimentation seen in the works. These artists’ approaches to media considered the production and employment of images to reveal both its power and its highly malleable nature.