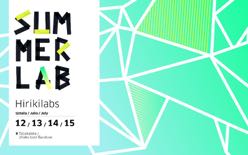 SummerLab’17 was a summer camp, a seasonal cooperative workshop, revolving around themes linked to the domains of technology, (digital) culture, open design and learning.

2017 edition was focused on the theme of Citizen initiative and social technologies. Makers, activists, researchers, creators and ordinary citizens carried out work around this theme at an encounter that was celebrated over four days, to be held between the Hirikilabs laboratory and the Ulía Nursery Park.

This year we were focussing on social technologies as elements in encouraging digital sovereignty and a free culture. This theme represented the nexus between the different thematic nodes of the event, and was viewed in the widest sense as an excuse for trying out divergent approaches and experiences which were as diverse as the participants or hosts themselves. Both SummerLab and Hirikilabs were spaces for critical thought around technology and its uses, whilst the Parque de los viveros de Ulía (Ulía Nurseries Park) was a self-managed residents’ initiative which had little in common with the technological context.

The theme was therefore an intersection between theory and practice, between grassroots movements and hacktivism, and between institution and informal relationships. The camp also distributed a programme of activities — which the participants themselves had managed and developed — to encourage different communities to come together.

SummerLab was a four-day event combining different work dynamics, meetings and leisure spaces which depend on participant contributions and interactions. The people taking part in this summer camp had shaped and programmed the activities. SummerLab was built around thematic nodes, each led by a person or group which could approach them in various ways (e.g. work/discussion groups, or spaces for experimentation), and were complemented with public activities including workshops, talks and meetings. Proposed nodes:

The group worked on reflections and proposals around technology using various methodologies in combination: group exercises, learning through discovery, tinkering, mental maps, theatre, dialogues, etc. The dynamic of this node was encompassed group critical reflection, and fun approaches which were intrinsic to exploration, experimentation and play.

Using the Ulia Nursery Park as a case study, this group launched a participative design process, the results of which could be implemented in the park itself. It aimed to use different manufacturing and recycling systems to create parts or furniture for day-to-day use in the park.

This node linked SummerLab with ‘maker’ practices and with the engineer Torres Quevedo, and above all with his invention: the Ulía aerial tramway, installed 110 years ago. The transbordador de Ulía connected the low-lying area next to the Gros neighbourhood with the high area of Ulía along a 280-metre route which was travelled in 3 minutes. The activities in this node brought this ingenuity closer to the general public, and the group also set out to create a reconstruction of the tram car using 3D printing and control via smartphone, and more generally had used various activities to address maker logic, the public domain and heritage.

This working group encompassed various activities related to the creation of audio devices which were limitless in terms of format and style. The idea was to encourage the exchange and fusion of know-how, and there's room for all types of techniques and knowledge, both traditional and modern. Electronic instruments, software, musical automatons, traditional instruments, visual percussion instruments, sound installations, and more.

The term Smart City had permeated our world, and along with it the ideology and logic that are intrinsic to the concept. Nowadays, there are more opportunities than ever to access and make use of technology for building a shared city model, based on a critical citizenry. These technologies include LoRa networks (long range i.e. low power, wide area). This is our opportunity to experiment with these networks and launch a few initiatives.

The group looked at the issue of Airbnb and San Sebastián, in a continuation of the workshop The Airbnb Effect, held in April 2017. This node looked at data use, using talks, dialogues and debates with the people and institutions involved in this area as a way of contextualising and complementing the objective nature of data.