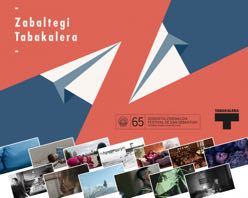 A competition section open to the most unconventional film proposals of the year, for which there are no formal rules, or thematic limitations. A true open zone within the San Sebastian Film Festival programming.

The Square, latest film from the Swedish director Ruben Östlund (Turist / Force Majeure), recognised with the Golden Palm at the last Cannes Festival, will open the Zabaltegi-Tabakalera section.

The participating films in this section of the San Sebastian Film Festival will compete for the Zabaltegi - Tabakalera Award, carrying €20,000, of which €6,000 will go to the director of the winning film and the remaining €14,000 to the distributor of the film in Spain.

The section will also  include contenders Philippe Garrel -to whom the Festival devoted a retrospective in 2007- with L’amant d’un jour / Lover for a Day, premiered at the Directors’ Fortnight; and Tesnota / Closeness, the debut by Kantemir Balagov, presented in Un Certain Regard. These titles join the Spanish productions announced last week: Saura(s), helmed by Félix Viscarret, a film from the Cineastas contados series; the directorial debut of Gustavo Salmerón, Muchos hijos, un mono y un castillo / Lots of Kids, a Monkey and a Castle, winner of Best Documentary at Karlovy Vary; the documentary No intenso agora / In the Intense Now, by the Brazilian filmmaker João Moreira Salles, which competed at Berlin; and the world premiere of Movistar+ series Vergüenza, written and helmed by Juan Cavestany and Álvaro Fernández Armero. This is the first time a television series will have competed for the Zabaltegi-Tabakalera Award.

Frederick Wiseman (Boston, USA, 1930), acclaimed with an Honorary Academy Award for his career in 2016, is an extraordinary moviemaker, known for his sharp portraits of American society, professional spheres and public institutions. Among those belonging to this latter sphere is his film Ex Libris: New York Public Library, which takes viewers behind the scenes of one of the world’s greatest institutions of learning. The work, number 45 in his career, will compete in the Official Selection at Venice. In 2011, in Zabaltegi-Specials, Wiseman presented Crazy Horse, an exploration of the legendary Parisian cabaret.

Raymond Depardon (Villefranche-sur-Saône, France, 1942), prestigious French photographer and filmmaker, co-founder of the Gamma agency and photographer for Magnum, has landed the César for Best Documentary twice, for Reporters (1981) and for Délits Flagrants (1994). In 12 jours / 12 Days, special screening at the Cannes Festival, Depardon gains access to hearings before a judge of people admitted to mental health centres in France, whose fates will be decided after 12 very important days when they will be assessed taking account of their medical background, the doctor’s recommendation and the judge’s decision.

Hong Sang-soo (Seoul, 1960) has developed a singular cinematic language and aesthetic over the 17 films he has written and directed, making him South Korea’s most international moviemaker. Last year, in San Sebastian, he won the Silver Shell for Best Director with Dangsinjasingwa dangsinui geot  / Yourself and Yours. In Geu-hu / The Day After, a contender in the Cannes Official Selection, he narrates the first day in her job of a woman whose predecessor had been having an affair with her boss.

Manuel Abramovich (Buenos Aires, 1987), whose short film La reina (2013) garnered dozens of awards, now presents his second feature after his debut, Solar (2016), presented at the BAFICI. In Soldado, screened as part of the Generation section at the Berlinale, Abramovich looks at the function of the Argentine Army more than three decades after the end of the dictatorship through the eyes of a young man who decides to enlist.

The artist and filmmaker Filipa César (Porto, Portugal, 1975), who participated in the research projects Living Archive and Visionary Archive, looks in Spell Reel at the film and audio material found in the Guinea Bissau of 2001. The footage bears witness to the birth of Guinean cinema as part of the decolonising vision of Amílcar Cabral, assassinated in 1973. Digitized in Berlin, screened and commented live, this material, presented at the Berlinale Forum, prompts debates, stories and predictions.

From the beginning of his career, the works of contemporary artist Clément Cogitore (Colmar, France, 1983) have been acclaimed at festivals worldwide: his first short, Chroniques (2006), won a special mention at the Festival Entrevues Belfort; Visités (2007) and Archipel (2011) were part of the official selection at Locarno; and Bielutine. Dans le jardin du temps (2011) was presented at the Cannes Directors’ Fortnight. The 49 minutes of Braguino are set in the Siberian forest.

Damien Manivel (Brest, France, 1981), author of Un jeune poète (special mention at Locarno 2014) and Le parc (Cannes 2016), and Kohei Igarashi (Shizuoka, Japan, 1983), helmer of Voice of Rain That Comes at Night (Seoul 2008) and Hold Your Breath Like a Lover (Locarno 2013), direct La nuit où j’ai nagè / The Night I Swam, a co-production between France and Japan selected for the Orizzonti section of the Venice Festival.

Having presented at the Cannes Critics’ Week his first film, Poslednata lineika na Sofia / Sofia’s Last Ambulance (2012), Ilian Metev (Bulgaria, 1981) won more than 40 awards, including Best Documentary at the Karlovy Vary Festival. With his second feature, ¾, following a family’s last summer together, he recently obtained the Golden Leopard in Cineasti del Presente at the Locarno Festival.

With respect to short films, as well as the already announced Plágan / Plague (Koldo Almandoz) and Plus Ultra (Samuel M. Delgado and Helena Girón) are El sueño de Ana  by the Chilean director José Luis Torres Leiva, author of Obreras saliendo de la fábrica, El cielo, la tierra y la lluvia and El viento sabe que vuelvo a casa / The Winds Know That I'm Coming Back Home, screened last year for this section; Gwendolyn Green, by Tamyka Smith, selected in 2015 as a part of the first edition of the Ikusmira Berriak programme; Calipatria by Gerhard Treml and Leo Calice, selected in 2016 as part of the Ikusmira Berriak programme and winner of the REC Post-Production Award; Flores, winner of the FCSH Award / Nova New Talent Award - Short Film at the IndieLisboa in 2017, directed by Jorge Jácome; and Sram / Shame, by Petar Krumov, which addresses the dilemma of a young boy obliged to choose between his mother and his girlfriend when embarrassment comes between them.