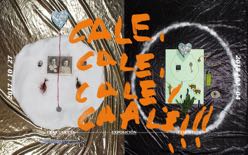 Magic and nature. Throughout history, magic moments and places have been connected to the natural in diverse ways. Putting an eguzkilore – a flower that looks somewhat like a thistle – on the door of a house to scare away genies, witches and evil spirits is still quite common today in The Basque Country. Cale, cale, cale! Caale!!! (Fall, fall, fall! Faaall!!!) is something that was still being shouted out until not too long ago by a farmer in Lucania, southern Italy, reciting a magic spell against storms. The choice between “magic” and “rationality” 1 was one of the major questions at the origin of modern civilization, with thinking veering insistently towards the latter, and attempting to forget the former. That notwithstanding, the protection of flowers, words, gestures is still very present in our lives.

The development of Catalan Spiritism in the XIX2 century, which, departing from the practice of the use of mediums, articulates the performance of egalitarianist practices, at the centre of which blossomed the beginnings of movements such as feminism, anti-militarism and cultural and co-operativist associationism; or research by the Peruvian anthropologist Marisol de la Cadena3 on the relationship between Indigenism and “politics” focused on two politicians specialists in rituals of the Andes mountains, which marry culture and nature in sacred and secular spheres, reveal moments in which the magical is seen to acts and acquire tangible form in settings of strife and political and social resistance.

Ritual. Ritual that generates an exceptional time and space context in which attention and perception are transformed, and where there isn’t just one single position, but different fluid and interchangeable possibilities of action for participants4. If we think of artistic practice from the standpoint of ritual, the possibilities for opening are increased, superseding the figure of the spectator, allowing us to imagine the transformation of the subject, even communal transformation.

Cale, cale, cale! Caale!!! questions the place of magic, ritual, the irrational, in relation to nature in terms of what, from the standpoint of Geology was known as the Anthropocene, which could also be defined as the Capitalocene, or, better yet, the Chthulucene5, as Donna Haraway purports in her edict. The project lays the ground for an environment of collective rehearsal, for choreography with time and space in which ideas and bodies are mixed with desires and contexts, projecting a common force and posing a series of questions. What ways can be opened by paying special attention to these moments if we do away with the old dichotomy between magic and rationality? What type of social and political proposals can emerge when ritual and incantation act together and blur the boundaries between culture and nature? What spaces of resistance for particular modes of life that are tending to disappear in global uniformity or new forms of collectivity, can be opened from here?

[4] Beatriz Santiago, I am going to describe a ritual, catalog of the exhibition A Universe of Fragile Mirrors at Perez Art Museum Miami