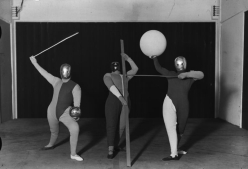 The term ‘kinaesthesia’ was coined by the English physiologist and neurologist Henry Charlton Bastian in 1880 and refers to the ability to perceive the movement and position of our limbs and trunk, also known as ‘muscle memory’.

This is a term and a science about how we perceive bodily movement and which has arisen during a time when, according to the Italian philosopher Giorgio Agamben, humanity is losing its ability to establish a fluid relationship with its own exteriority, its own gestures.

It could be the hidden explanation for the obsessive proliferation at the turn of the 20th century of all manner of initiatives to preserve and catalogue the body's gestures and ‘techniques’, whether the tendency to classify arising from the new scientific establishments of the time or the exhaustive documenting exercise by means of then-new film techniques.

Starting out from the problems inherent to modern society, this programme organised in the framework of the Ariketak: la segunda respiración biennial project uses different tools to examine the role of gesture, including a cinematographic study of the slapstick phenomenon and a look at how the martial arts of the East are culturally translated.