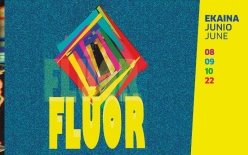 There is an unclassifiable category of cinema for which you have to invent new definitions. Fluoride cinema is a state of mind and spirit: cinema that mixes genres and plays with humour and the idea of metacinema, with films that are very aware both of history and of themselves, and that propose re-interpretations without any kind of prejudice. Fluoride cinema is like an onomatopoeia, a scream, a cult fanzine. After B movies and Z movies come Fluoride movies. This means absolute freedom: in the performance, in the roles of the characters, in how the images relate to the music, to the ritual, to the “arty”, to the bodies and the way they look at the camera.

It is cinema for the twenty-first century, when the relationship we have with the audiovisual impartially mixes YouTube and mobile phone emoticons with the memory of the classic films we watched in the twentieth century. Fluoride cinema is cinema that shines in the dark. This intensive season over a full weekend is like a nightclub in which all the white shirts, including yours, glow as if we have entered another dimension.