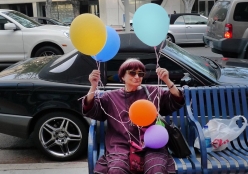 The Nosferatu Programme dedicates its new season to the French filmmaker Agnès Varda, who has been working since 1954 and who, last year, premiered  Visages, villages (Faces Places, 2017) at the Cannes Film Festival, and who received the Donostia Award for her career as well as an honorary Oscar.

Born in Brussels in 1928, she has developed all of her work in France. Varda is, without a doubt, a leader in terms of European cinema over the last 60 years and a filmmaker with one of the most interesting, consistent and long-lived careers; someone who is ahead of her time and has experimented with formats and genres almost since her beginning, not to mention the fact that she is a leader in the feminist movement.

She was five years ahead of the “official” appearance of the French New Wave (Nouvelle Vague) with her first feature film, La Pointe Courte (1954), a fiction film with non-fiction elements that anticipates mixed works in which feature-length films and short films alternate.

This retrospective look, which will include almost all of Varda's work, consists of 19 feature-length films, 16 short films and a TV series that will be shown in this cinema between 21 November and 5 June. It also includes four cartes blanches chosen by the filmmaker herself: four pieces that she considers to be key in her career and in her relationship with the history of cinema.

Agnès Varda will visit San Sebastián to present the cycle on a date that has not yet been set.

As always, the cycle will be accompanied by the publication of two books: one in Spanish and the other in Basque, which are being prepared by the Catalan critic and historian Imma Merino and which will be published next spring.