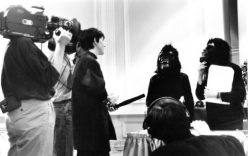 EQZE promotes its research output with the launch of four new projects.

New approaches to feminist cinema, the conservation of film archives and Basque cinema are added to the research projects devoted to Andrei Tarkovsky and the San Sebastian Film Festival.

-Students will actively take part in these international projects, the results of which will be made public in various formats

September brings with it the start of the first course at Elías Querejeta Zine Eskola and the three curricular programmes (Film Preservation Studies, Film Curating Studies, Filmmaking Studies) that make up its academic programme. It also brings an important boost to the research aspect of the school, with the aim of consolidating the identity and character of EQZE as an international think tank, research centre and centre for experimental practice and educational innovation on the past, present and future of cinema.

From the outset, it has been stressed that, for EQZE, research is a form of "being" at the cinema. It is a work routine and methodology that involves the students, teachers and professionals who work around the centre in equal measure, and which aims to consolidate a preferential space for exploration, critical reflection, innovation and the transmission of knowledge.

The research activity at the centre is structured around four lines of research:

1. Teaching and learning about cinema.

2. Theoretical approaches to innovative techniques in archiving, curating and filmmaking.

3. The interconnection of cinema with other scientific, humanistic and aesthetic disciplines.

Work on these four lines is carried out through interdisciplinary, cooperative and open research projects. These are interdisciplinary projects because they will have the active participation of EQZE students and will be enriched by the contributions of the teachers from the three curricular programmes of the school, thus developing methodologies based on exchange and learning between disciplines and knowledge. They are cooperative projects, as they are conceived in close collaboration with local and international film and academic institutions. And they are open projects because both the results and the questions they generate will be socialised through different media, formats and languages, that will include creative pieces, specialist and informative publications, public programmes, online content and exhibition projects.

The four new projects that EQZE has incorporated into its catalogue, related to new approaches to feminist cinema, the conservation of film archives and Basque cinema, delve into the main lines of research defined by the school and are carried out following the aforementioned methodology of the school.

Since the 2018-2019 academic year, the Elías Querejeta Zine Eskola Research Department will work on developing the following research projects:

1. Cinenova: Women’s past is always present

Cinenova is a London-based feminist film and video distributor founded in 1991 from the merger of Circles and Cinema of Women, two distributors from the 1970s and 1980s. Its catalogue includes nearly 500 titles in various formats and genres (experimental, narrative, documentary, educational, etc.) dating from 1912 to 2001 and currently held by the independent and experimental film distributor LUX, based also in London. With the collaboration of this institution, the project proposes an approach to this collection that includes the restoration of a selection of materials from Cinenova's collection and a critical and gender perspective research aimed at contributing to the knowledge and dissemination of the history of cinema made by women. The result of this project will be shared through public programmes that will include the screening of these materials.

2. This Film is Dangerous.

It is estimated that about 80% of film production in the silent era, made on nitrate, a highly flammable material, has disappeared. For this reason, the discovery of two rolls of film dated 1924 in the personal archive of the Navarrese filmmaker Javier Odériz is extraordinary. These are reels from the American film The Price of the Party directed by Charles Giblyn (a film of which there are no copies, according to the US Library of Congress) and the German film Die Vier letzten Sekunden des Quidam Uhl (The Last Four Seconds of Quidam Uhl) by Robert Reinert, one of the pioneers of German expressionism, a film of which the first, fourth and fifth parts are kept at the Filmmuseum in Munich. With the participation of the Basque Film Archive, this project will focus on two objectives: carrying out research that targets the historical, social and aesthetic context in which they were produced; and, from a technical point of view, analysing the state of conservation of the materials found to determine the possibility of their digitisation and public showing.

3. Basque cinema on the border.

Since the mid-1960s, Cineclub Irún has become a meeting place on the border. It was a geopolitical border and, therefore, an area for smuggling ideas, with a flow of international influences. But it was also a meeting point for aesthetic disciplines: a area of contact for filmmakers, musicians and visual artists such as Fernando Larruquert, Néstor Basterretxea and Jorge Oteiza. It was not a coincidence, therefore, that they would call the film production company they founded in 1964 “Frontera Films”. Created by the Basque Film Archive and EQZE, this project takes this confluence of borders that characterised Cineclub Irún as a critical paradigm for rethinking Basque cinema. From the 2018-2019 academic year, various international researchers will analyse specific case studies, with the aim of expanding or transgressing the frontiers that define Basque cinema. Each case study will be published on the school's website in the form of an online notebook and its presentation will be accompanied by a workshop or seminar by the researcher responsible. The first issue of this collection shall we published early next year and it will be opened to participation through a public call, details of which will be made available shortly.

The “Amateur Movie Database” project of the University of Calgary (Canada) has developed networked research tools for the restoration and enhancement of the history of amateur cinema in North America. By exploring various sources (magazines, catalogues, programmes), a film database has been created which has made it possible to locate people and entities that keep amateur film collections, which are generally characterised by their dispersion and difficult access. In what will be the first international expansion of this project, EQZE will lead a new line of research on the heritage of Basque amateur cinema. The aim is not only to enhance the database with little explored sources of this other history of Basque cinema, but also to design protocols that make it possible to adapt the project to international and multilingual contexts.

These projects have been incorporated into a growing catalogue which already includes two other proposals in progress - “Lost Lessons of Andrei Tarkovsky”, on which two public seminars have already been held, and “Zinemaldia 70: all possible stories”, a project aimed at generating a living archive of the festival.

After the extraordinary discovery in the archive by one of its closest collaborators of recordings of 90 hours of film lessons given by Andrei Tarkovsky, EQZE is taking part in the research, restoration and dissemination of these recordings as part of a project exploring the intersection between filmmaking and film education. After a first phase of work that took the form of two interdisciplinary days of research and creation in 2017-2018, the 2018-2019 course will focus on two lines of work in collaboration with the Andrei Tarkovsky International Institute in Florence: the process of restoring and researching recording tapes and the design of an exhibition project based on the materials recovered.

The San Sebastian Film Festival has created the “Zinemaldia 70; all possible stories” project, together with the research department of EQZE, Tabakalera and the Basque Film Archive with the aim of creating a living archive of the Festival, the first phase of which will culminate in its 70th edition, in 2022. The proposal will highlight the importance of the Festival's documentary collections (letters, photographs, critiques and reviews in newspapers and magazines, books and films) through innovative research methodologies and curation of the contents. The aim of the project is to generate a reflection on the past, present and future of the Festival. Two lines of work will be dealt with in the 2018-2019 course. Firstly, the design of a first digital collection based on a selection of archive collections to be published online. And secondly, the curation of a programme of screenings accompanied by research and dissemination materials, with the aim of establishing dialogues between the history of the Festival and contemporary filmmaking.

As part of this new boost to the research output of Elías Querejeta Zine Eskola, the centre's website (zine-eskola.eus) will soon launch a new section in the form of a blog or weblog that will make it possible to follow the development of these projects and the audiovisual materials that will be created in the course of their respective processes through texts, images, sound files and videos that will be periodically incorporated into this space.